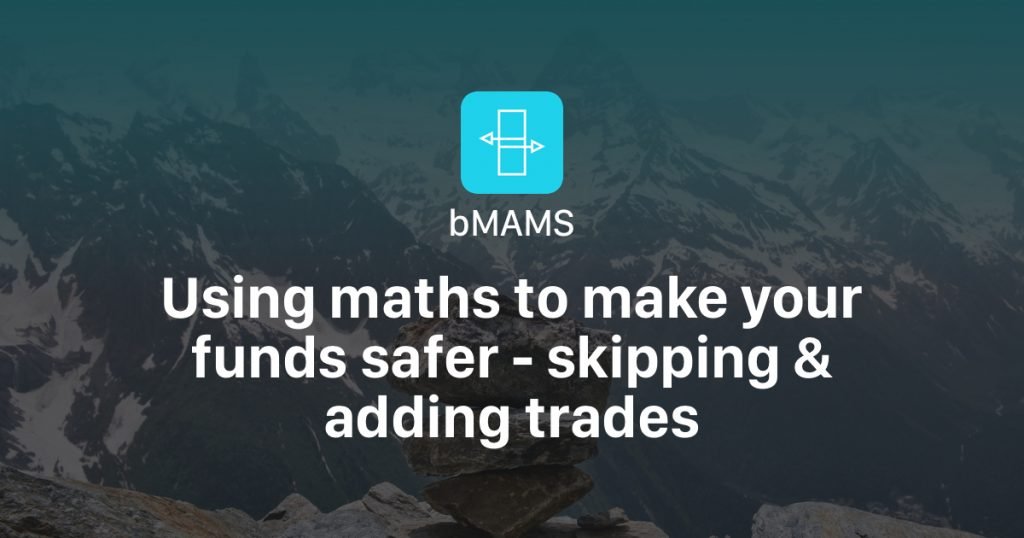 This week we look at another Monte Carlo Analysis statistical tool- skipping and adding trades. Like last week’s trade re-ordering it is designed to stress test a system and give a more complete idea of the risk profile it is carrying.

What this trade skipping & adding method does is either add up to 10% more trades, or remove up to 10% of trades – from a system’s result.

Usually this is done thousands and thousands of times to get the statistical values- however, on a graph that would look like a mess. For simplicity’s sake here is a trade system with 100 variations represented on a chart:

The central dark blue line is the original system, positive over time but with a flat period in the middle of its path. Also of note is the highly profitable single trade that occurs at around the 240 trade mark.

Each of the additional lines represents that same system but with up to 10% of trades either added or removed from its trading results.

We can also see how systems had trades added and removed by looking at the end of the chart. When the background moves from blue to white there are more trades than the original.

Last week the beginning and end of the monte carlo analysis had the same point, and the trade re-ordering only changed the path between those identical points.

This week the trade records look very different. What an effect adding or removing up to 10% of trades can have! It is quite surprising to find such a difference.

The main part where conclusions and judgement can be drawn is in the numbers though. Here is a table of some simple statistics: 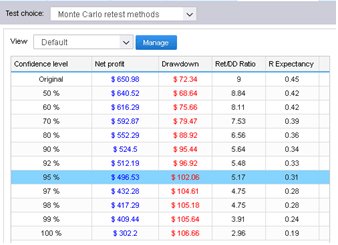 The permutations are listed in order of drawdown. The worst permutation (of which 100% of all others are better than) has an increased drawdown of about 40% relative to the original. It also has lost about 60% of its profit.

This would cause us concern and likely remove this candidate system from consideration.

But why? What have the statistics found? – If we again look at that graphic highlighting the single large trade:

There is a 10% chance that this trade is removed from a trading system. This trade earns a significant chunk of the systems overall profits, so removing this one large trade would significantly reduce its profits. It would also increase its drawdown as the system would not recover to a new all-time-high without it.

So the statistics are saying that this system is sensitive to which trades are counted, removed or duplicated. Kind of a measurement of the consistency of the system’s trades. This test would judge this system not to be of sufficient consistency to trust with funds.

When we build systems, we look to find not the ‘best’ systems but the ‘strongest’ systems. Not the most beautiful systems, but the most rugged. This was we can be sure of the risk the system is taking and the market punishment it can withstand.

The president of the United States doesn’t pick his bodyguards to protect him based on looks. bMAMS don’t pick systems to protect your funds based on sexy lines either.

What counts is the ability to protect the assets from danger.